I collected the photos of our bike tour that were posted to Facebook (Thanks Chris for finding the link!). Click below to see them all. 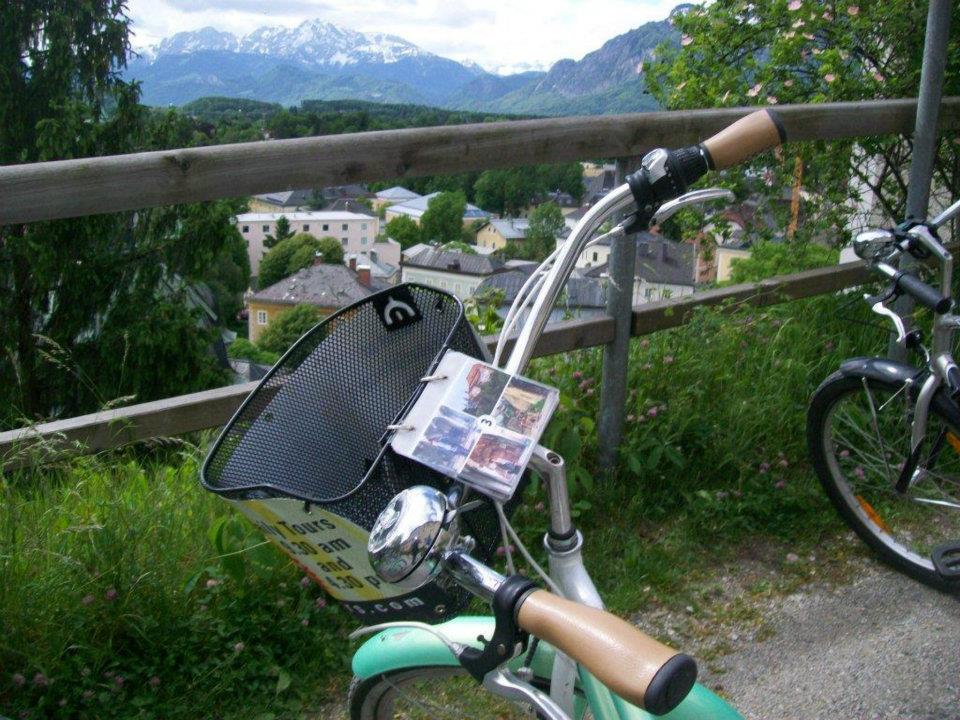 Here are the pictures from Salzburg. We’ll have a few extra that our bicycle tour guide took soon. Click below to see the full album. 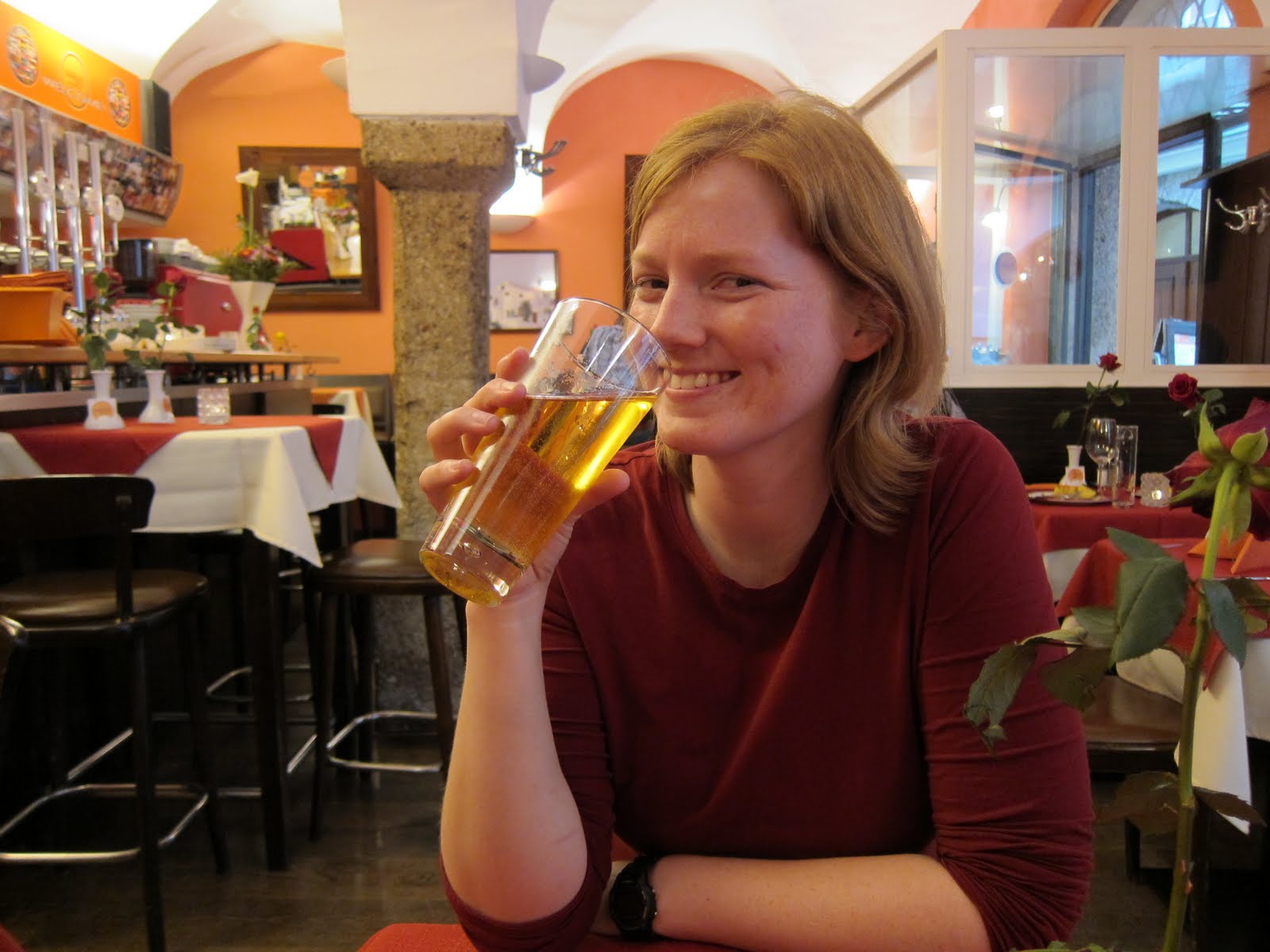 Did the Taranusauruses make it back safely to their hostel last night? Yes, of course; this writing proves it. After getting directions several more times, they finally found a flight of stairs that led up the little mountain. The path was well-lit but still creepy due its deserted state and also because it is located in a thick forest.

They were up and ready to go before their roommates stirred and before the hostel’s free breakfast was served. The next hour was spent failing to find a post office, but they did patronize several bakeries. Raul and Lauren were the first to arrive at the meeting point for Fräulein Maria’s Sound of Music bicycle tour. If you look for them on Facebook, there might be some pictures of the Taranusauruses from today.

Two dozen people showed up for the popular tour, and so they were split into two groups. Their guide, Rupert, was experienced and entertaining as he took them past several locations featured in the musical. It was a nice way to see Salzburg. The first half of the tour took place in the Old Town of Salzburg, followed by a relaxing ride through the picturesque countryside on its outskirts. The entirety of the route afforded stunning views of the mountains near Salzburg. The rest of their group was comprised of a young couple from the Midwest, a family from South Africa, and four young Taiwanese.

After the bike tour, Raul and Lauren took a leisurely walk through the Old Town, following the self-guided walk in their guidebook. They took in all the major sights, including the massive Salzburg Cathedral, a restaurant where Charlemagne is said to have eaten in 803 A.D., and Getreidegasse, the historical commercial center of the town. On that street, Raul sampled several homemade spirits at a century-old establishment named Sporer. The spirits were delicious (lecker!).

They decided not to attend a concert since they are leaving early in the morning for Switzerland and instead, wrapped up the evening with dinner and completing their preparations for the next day’s trip to the train station from the top of the mountain. They bought stamps for postcards and later realized that the woman had charged them double. Their expectations for recompense were low, but they returned to the shop anyway. The woman was immediately apologetic and grateful to see that they had realized her mistake and returned. She corrected the charge and even offered a bag of chocolates as a token of apology. The chocolates are delicious (lecker!).

We finally were able to get some pictures up from Vienna and Hallstatt mostly:

Lauren and Raul would like to wish Caitelin a very happy birthday today! Happy 27th! Lauren misses you very much and can’t wait to talk to you again soon!

Days 0 to 4 have been updated with the journal entries. Unfortunately, the computer Raul and Lauren are using in Salzburg will not allow pictures to be transferred off the camera, so those will be posted at a later time.

Raul and Lauren said good-bye to their kind host Gerhard and mosied along to the boat dock. They were pleasantly surprised to find Ian and Brenda there, waiting for the same ferry to take them across the lake to the train station. They spent the journey to Salzburg sharing travel stories, and Raul and Lauren were interested to learn about life in California.

At the transfer point, Lauren and Raul decided to ride in a six-person compartment and ending up sharing it with a couple from Seattle, whom they had previously met on the ferry in Hallstatt. They gave Raul and Lauren advice about hikes around Salzburg and also about working for the Semester at Sea university program.

It is always nice to meet and get to know interesting people while travelling.

In Salzburg, they ascended Mönchsberg, a small mountain in the city, to Gasthaus Stadtalm, the hostel they had chosen for their lodging. Fortunately, they had beds available.

Next, Raul and Lauren made their way to Festung Hohensalzburg, a fortress overlooking the city. They opted to walk up rather than take the funicular. Near the top, they were dismayed to find that they would have to pay most of what it would have cost to ride the funicular to enter the fortress anyway. The fortress has a good view of the city below, but it was not worth the effort or cost to get there. At least the entrance ticket they were forced to buy included a ride down the funicular.

Also inside the fortress grounds, they ran into Brenda and Ian again as they were going to a concert. Lauren was especially glad to see Brenda, because she was “having a rough time,” as Ian put it, and so was Lauren. The heat, hunger, and disorientation was taking its toll. It would be nice to see a water fountain once in a while.

Raul and Lauren had a quick dinner at Saran Essbar Restaurant. They have begun to see a pattern of exceptional quality in restaurants run by non-Europeans, who are more attentive and eager to please. The food was tasty, but they were in a hurry to get to a concert and could not linger for dessert. Unfortunately, they discovered that the “nearly nightly” concerts at Mirabell Palace were not offered that night.

They meandered back to the old town and tried to find a way up Mönchsberg now that the elevator is not running. Will they make it back to their hostel tonight?