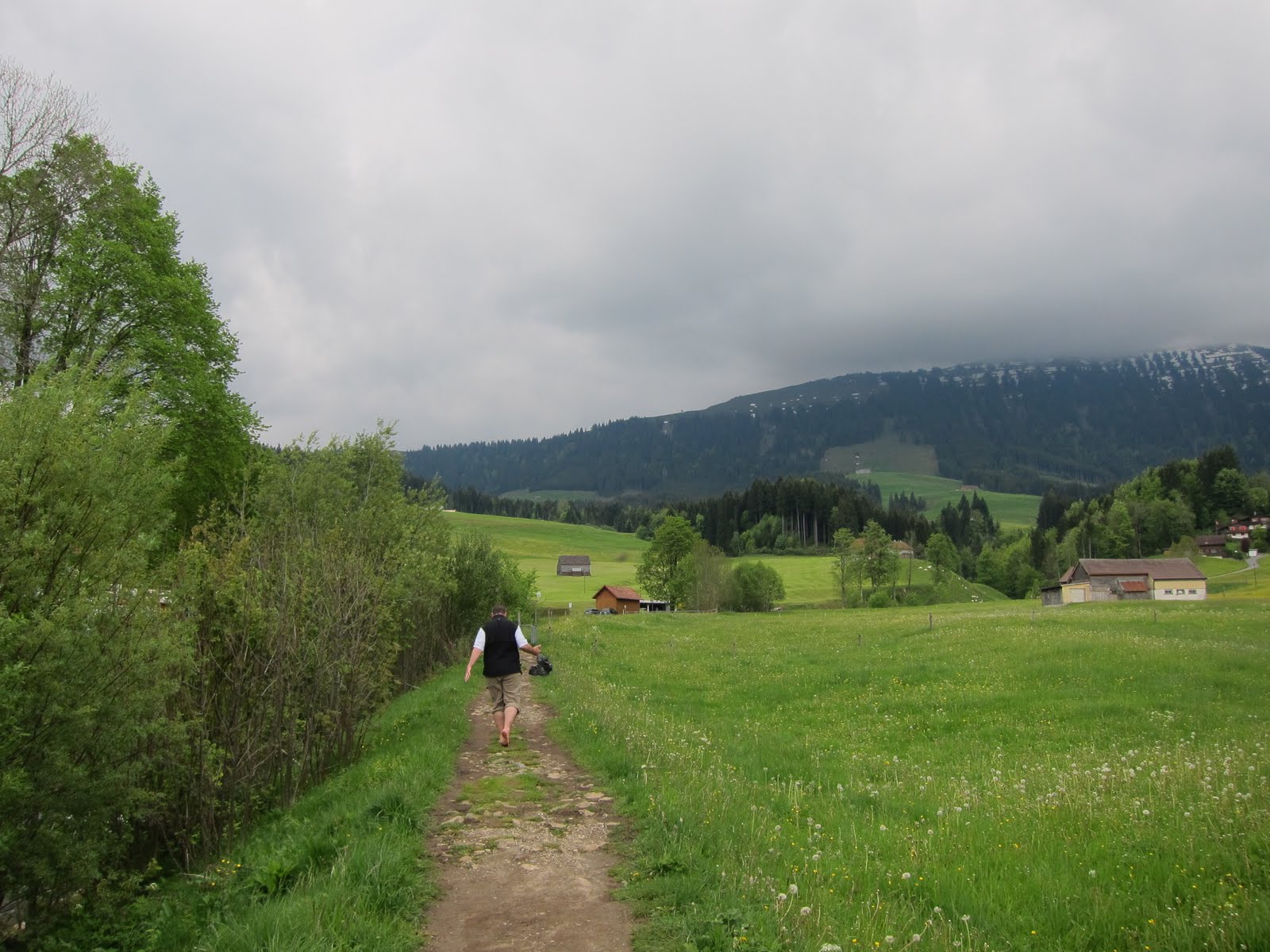 The adventurers left Salzburg with the first light of day. They wished to get to Switzerland as early as possible. Once they crossed into Switzerland, they needed to validate their Swiss Pass, which allows them to use all public transportation in Switzerland without having to buy tickets. This is extremely convenient, but they missed their connection in St. Margrethen while they waited for their pass to be validated. They arrived in Appenzell a half-hour behind schedule as a result. Still, they made time to do the Barfussweg (Barefoot Walk) and caught the last lift of the day up to Ebenalp.

The Barefoot Walk features a variety of materials on which to walk, such as large, smooth stones, sharp gravel, wood chips, grass, mud, tree stumps, and some stretches of asphalt. The path took them through farms in the Appenzeller countryside, and they were treated to a peaceful symphony of cow and goat bells ringing from all the surrounding hills. There were also stations of very cold alpine water using principles from a Swiss therapist, Sebastian Kneipp, who advocated the use of varying water temperatures and pressures for good health. Lauren and Raul think Kneipp had a good idea, for they experienced the invigorating properties of mountain water for themselves on this walk as well as in Hallstatt when they dipped their feet into a cold stream after the long hike to the waterfall.

They experienced a rarity in Swiss punctuality while travelling to the Ebenalp lift. Two trains they waited for were several minutes tardy. This is why they were on the very last lift of the day to Ebenalp. Once up on the mountain, they could only hope that Berggasthaus Äscher would have beds for them. Had they been turned away, they would have faced an arduous hike down the mountain in the fading light with all their belongings on their backs. Fortunately, there was room for them at the inn, so they unloaded and ate a hearty dinner of rösti, a traditional Swiss dish akin to hashbrowns. Raul ordered his with melted Appenzeller cheese and two fried eggs on top, while Lauren had hers plain. Raul says it’s because she’s boring. Lauren realized that Romanians eat their salad with the main course, and not before, because they don’t drink water during the meal. Lauren has learned to spread out the meager eight ounces she is given throughout a three-course dinner.

At the moment, Raul is enjoying a kaffe lutz (sp?), which is an alchemical concoction of unknown composition. It probably has some spirits and coffee in it, and it’s hot, which is good, as it is unseasonably chilly and also quite cloudy.

Berggasthaus Äscher is one of a score and eight mountain inns in the area surrounding Ebenalp which serve as a refuge for the mountain-top adventurers. Äscher is uniquely situated in and under a cliff. The cliff prominently forms the back wall of the building. They are sleeping on a mat in an upstairs space for eight to ten souls. The sleeping quarters have no external heat source. The only heating in the building is a wood-stove in the dining area. Thus, they will rely on their own bodies’ warmth to get them through the night.