We are obviously slowing down with posting photos, but another album is ready for your viewing pleasure: Mount Pilatus. We ascended via gondola about halfway, to a cable car station. Before going all the way to the top, we did some activities in the area including a summer toboggan run. Unfortunately we weren’t able to capture the actual toboggan run on camera, as that was forbidden. On the other side of the mountain, we descended via an incredibly steep cogwheel train.

Lauren is out of town, and she is the one responsible for the captions, so it will be some days before another album is ready. Click the picture below to view the full set. 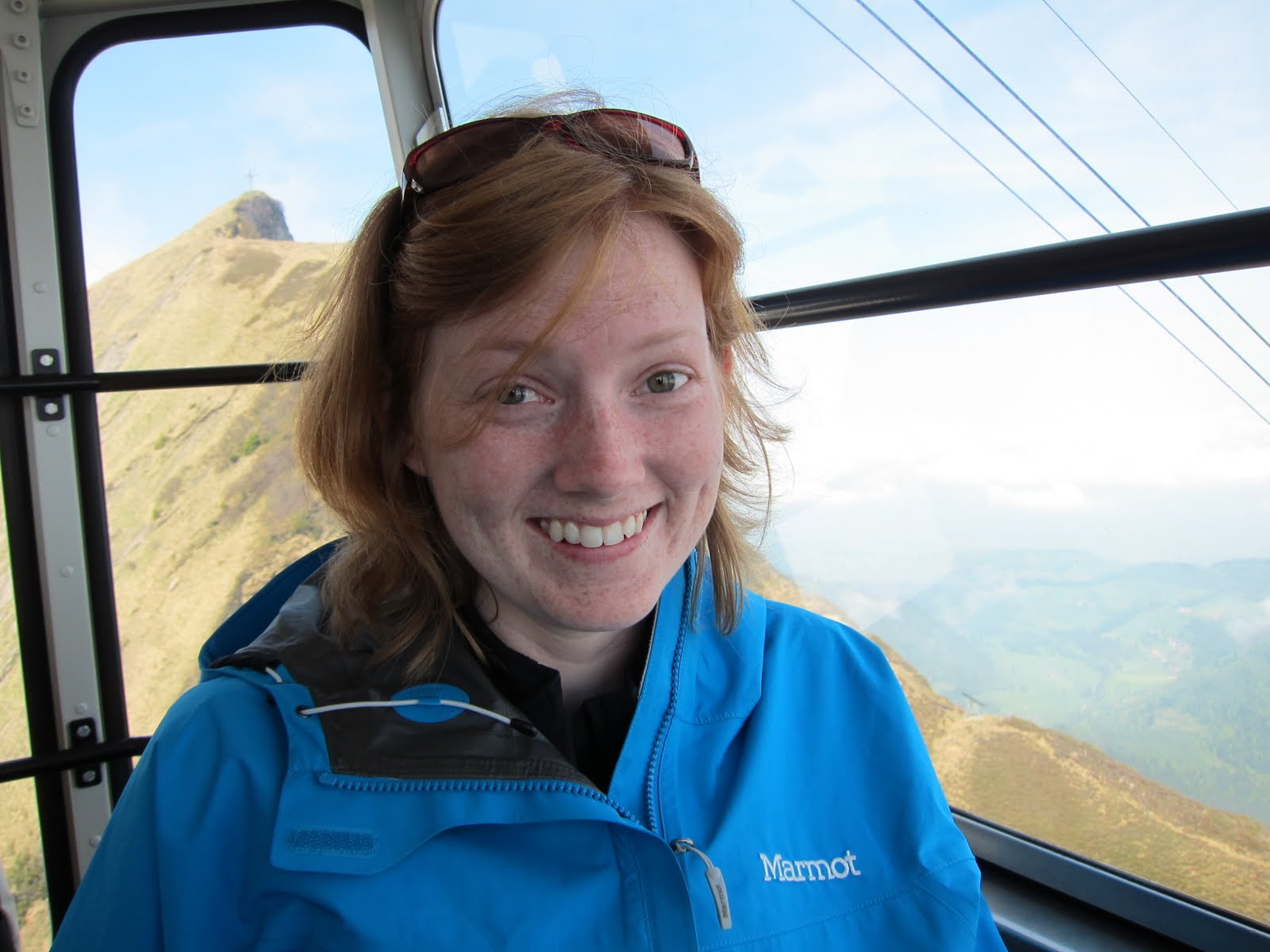 The windy day caused the cable car to sway a bit, causing Lauren a little bit of anxiety.

A big album of our three days/nights in Luzern is ready. The Mount Pilatus photos will be in a separate album. Click the picture below to view all the photos. 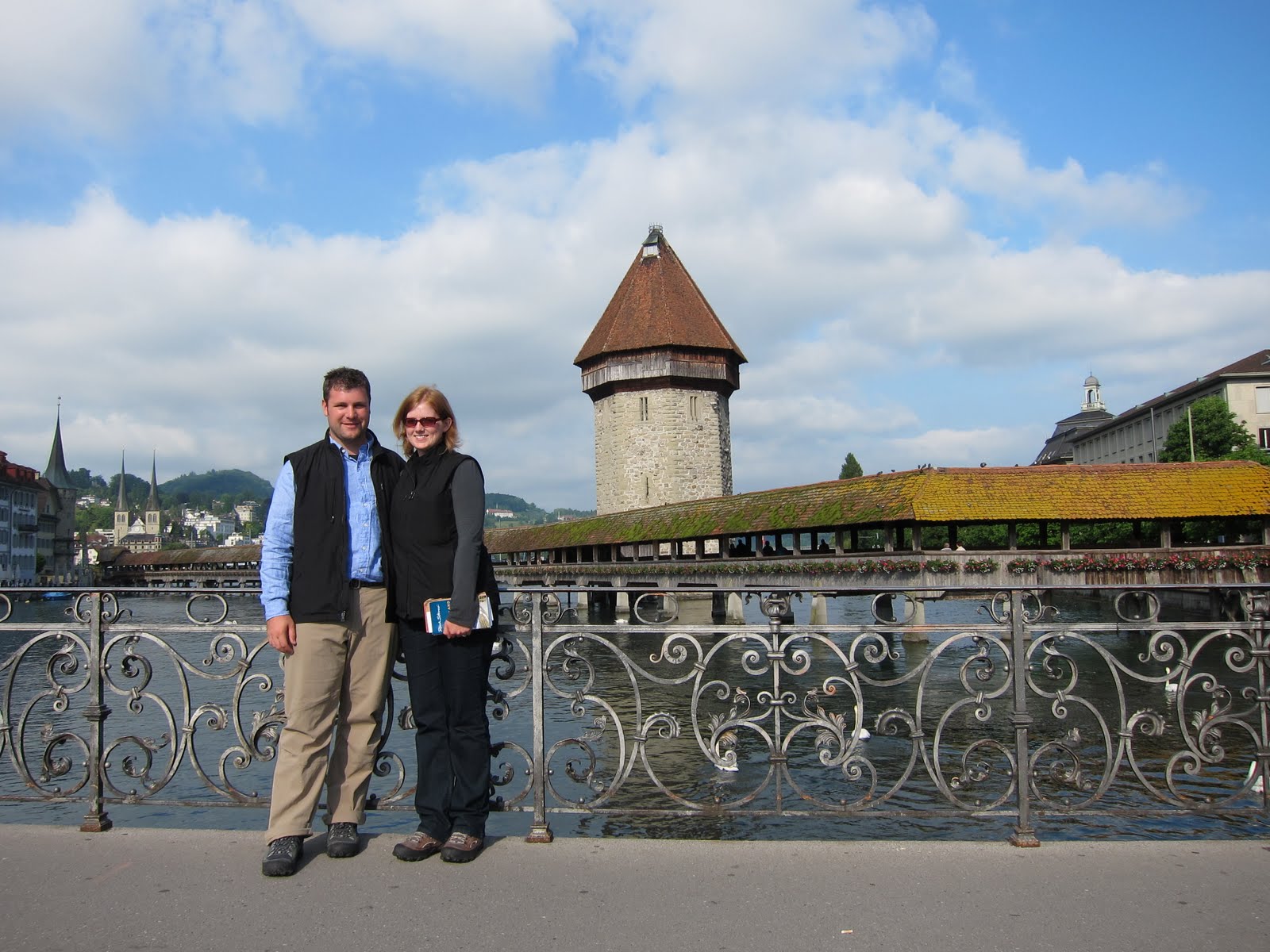 View of the Chapel Bridge; Reuss River flows through Lake Luzern, which is behind us.

The first destination this morning was Luzern’s Jesuit Church. The Rococo interior is bright and airy, with clear glass windows, white walls, and pink stucco marble. It stands in contrast to churches of darker interiors with stained glass.

Since their hostel does not provide breakfast, Raul and Lauren headed to Bäckerei Hug to “recharge,” as Lauren would say. They had rösti and raclette. With bellies full, Lauren navigated the bus system, and they arrived at the famous Lion Monument of Luzern. Despite their guidebook’s description of the monument being huge, Lauren was still astounded by its immensity. The sculpture of the wounded lion commemorates the Swiss guards who died defending the French king during the Revolution. Surprisingly, Lauren did not cry at the sight of the tears and pain evident on the noble beast’s muzzle. It is difficult for her to be so moved when there are hordes of tourists about.

With their emotional needs fulfilled, Raul and Lauren proceeded to satiate their intellectual thirst over the next several hours with a visit to the Swiss Transport Museum. They explored all modes of transport in Switzerland, including trains, trams, automobiles, bicycles, sailing vessels, aircraft, and high mountain lifts. One of the features that sets this museum apart from its drier counterparts is the multitude of interactive exhibits.

For example, in the building dedicated to automotive transport, there is a wall where dozens of vehicles from all eras are stacked on individual shelves. These are actual automobiles, not models, mind you. A robotic lifter is commanded by museum visitors to retrieve any one of the automobiles and bring it to the theater/viewing platform. A short presentation on the history of that particular model is then given. This was the highlight for Raul in terms of interactive exhibits. Other highlights include: a 1/20 scale model of a dual carriage alpine lift that can be operated on command, a full size replica of one of the earliest aircraft where one lies prone to fly it–complete with controls and flight simulator, nautical knot tying, vision tests, and countless others.

In the courtyard between the buildings, there was a test track where one could test drive a Chevy Volt, ride electric bicycles, or try out Segways. Lauren dislikes Segways, but she tried one anyway–she still dislikes them. Both had fun on electric bicycles. Raul gave the brakes a good test when he almost ran over some pedestrians.

It was a long day with much to see and do at the museum but well worth the time and entrance fee.

They finished the evening with a visit to Luzern’s public library and dinner at Restaurant Rathaus Bräuerei. Lauren ate Swiss macaroni and cheese while Raul had ravioli in tomato-butter sauce.

Raul and Lauren awoke to yet another cloudy day. They deliberated over whether to do their mountain excursion today or tomorrow and ended up choosing to stick to their planned itinerary. They purchased their gondola tickets for Mount Pilatus and got in line to board. Ahead of them was an Asian couple, and Raul and Lauren decided to let them ride alone in the gondola, even though there was room for four per cabin. Thinking they would get to ride in private, they boarded the next one but quickly realized that the two older gentlemen behind them were more focused on efficiency than courtesy.

The first order of business in this excursion was a few hours of Alpine recreation. Disembarking at Fräkmüntegg, the tree-line of Mount Pilatus, they were the first in line for the mile-long summer toboggan run. Raul breezed through the run quickly, while Lauren rode the brake most of the way down.

After this quick diversion, they proceeded to the Seilpark (Rope Park). Here, there are ten courses of varying difficulty, wherein one must negotiate a series of challenges utilizing ropes and platforms high among the trees. They donned their harnesses, helmets, and gloves and listened to the comprehensive instructions. Then they completed the obligatory, introductory course. Lauren was ready to quit, but she found the willpower to go through a second, slightly more challenging segment. It wasn’t long until she was in tears, and this was the last one she did. Raul was eager to continue and chose a blue course, marked Difficult, while Lauren watched and photographed from below. Here, the height was ramped up considerably and lacking were the handholds present in the previous courses. There were also sections with netting that were annoying because one has to stop to hook and rehook the safety carabiners with every step. Lucky for Raul, his memory has already erased the terror he too felt at the dizzying heights in the trees.

After a few more courses that culminated with a leap of faith from the top of a tower, Raul and Lauren ascended to the summit of Mount Pilatus via cable car. They took in the views and ate the sandwich they had packed. Finally, they descended the other side of the mountain on the world’s steepest cogwheel train with grades up to 48%. That’s more than halfway to a right angle!

At the base of the mountain, they boarded a ferry that would take them back to Luzern. The evening was spent eating on the riverfront again–this time, traditional Swiss fondue.