We spent one day on an excursion called the Chocolate Train. It included a train ride at sitting at the front of the train, getting the front-row view the conductor normally sees, a visit to a Gruyere cheese factory, and a Cailler chocolate factory. Click the photo below for the full album. 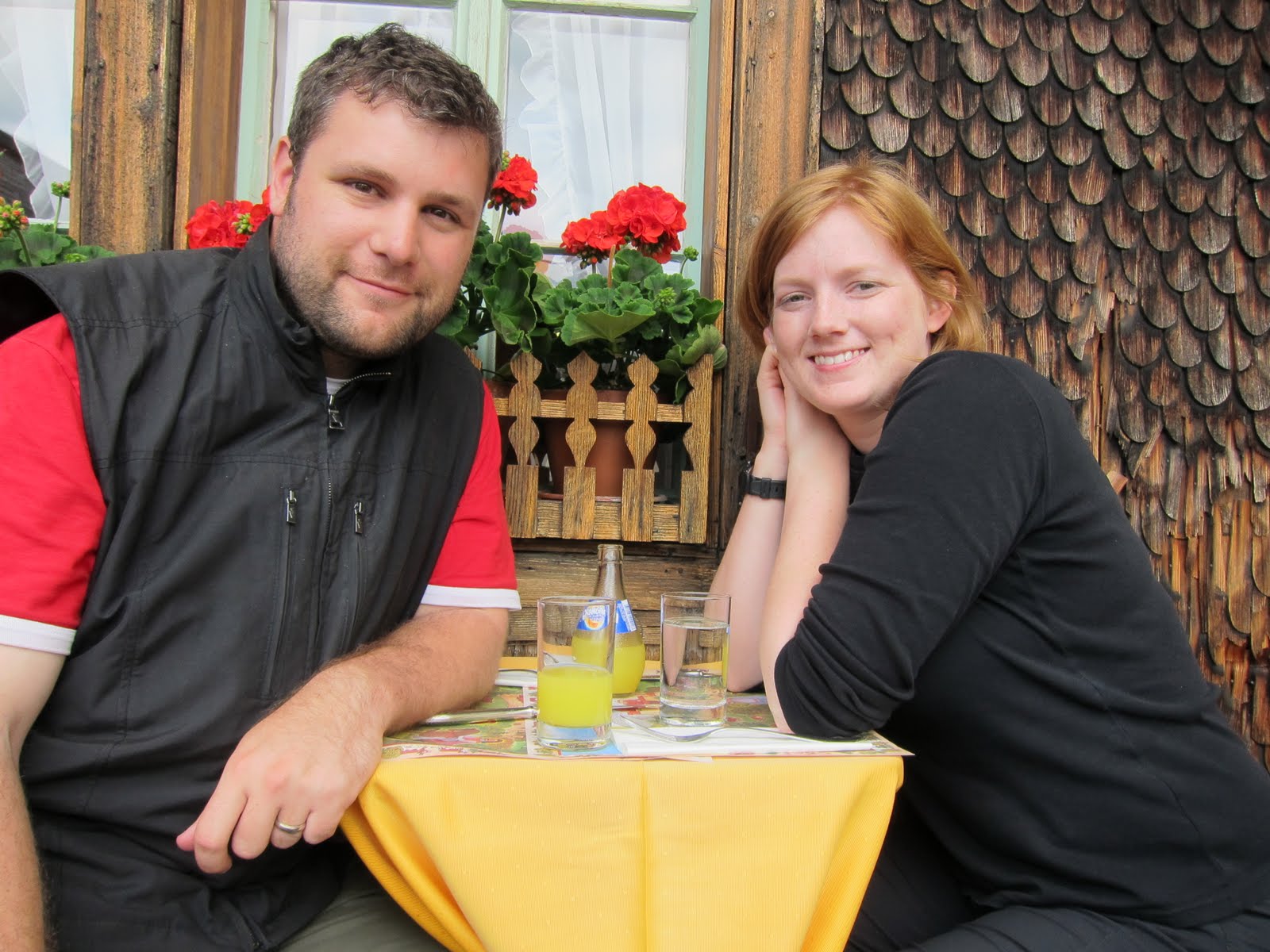 The weather was perfect for lunch outdoors in the town of Gruyères. Yum, Orangina!

After another typical but delicious Swiss breakfast, Lauren and Raul departed for the Montreux train station in order to board the Chocolate Train. On this special train, there were classic, “Belle Epoque” cars as well as a panoramic wagon. This train also had so-called “V.I.P.” seats which allow the passengers to have an unobstructed view in front of the train. Imagine their surprise when they realized that their seat reservation placed them in the very front V.I.P. row. It isn’t a Golden Ticket, but it was still pretty exciting.

They arrived in Montreux with ample time to board the Chocolate Train, but some cranky old Germans were there well in advance and seated in Raul and Lauren’s reserved seats. While they spent several uncomfortable minutes deliberating whether to just sit somewhere else or attempt to claim their rightful seats, the train filled up, and it became clear that sitting anywhere else would result in taking someone else’s reserved seat. Raul failed to establish communication with the usurpers. He showed them his ticket, but they seemed clueless, so in the end, it was necessary to pass the resolution of this dilemma on to the train attendant who efficiently evacuated Raul and Lauren’s seats. The Germans seemed to be a large party, surrounding Raul and Lauren in the rest of the V.I.P. seats. At various times, they had some animated discussions and some of them seemed upset. What were they upset about? Who can say for sure? But Lauren still felt a twinge of guilt over the affair.

The first stop of the excursion was La Maison du Gruyère, a cheese factory. All the train passengers were corraled through the tour as though they were cows, listening to an audioguide narrated by a “cow” named Cherry, because she was born in the cherry season, not because of her colors. Having heard the basics of large-scale Gruyère production, they were bussed to the town of Gruyères for lunch.

Gruyères is a very cute town, although there were too many tourists. Raul and Lauren briefly visited the Gruyères Château and returned to the main street for lunch. Dessert was a delicious bowl of raspberries with cream. The cream was of an unusual consistency and extremely tasty.

After lunch, they explored the back lanes of the town and ended up pretty much alone on a beautiful hiking trail. They walked along it for a bit, enjoying the sounds of the grazing sheep and cows from the nearby hills.

The next stop was the Maison Cailler, a chocolate factory. Once more, they were corraled and divided into smaller groups for an entertaining English tour of the history of chocolate. After the tour, Raul and Lauren were able to observe the production line of a nut-coated praline and more general information about chocolate and how it is produced. The culmination of the visit was, of course, the tasting room. Lauren did not believe it possible that too many samples could be provided, but Cailler accepted her challenge and won. Raul’s limit was not reached.

On the way back to Montreux, Raul attempted to barter their V.I.P. seats for seats in the 1920s coaches, but nobody accepted the exchange, for some strange reason. Perhaps word of the cranky Germans had spread. Nevertheless, after a stop where some people disembarked, Raul and Lauren found a couple of empty seats in the other coaches and enjoyed a most comfortable ride back to Montreux. The adventurers really had the best of both worlds on this train.

Finally back in Lausanne, the Taranusauruses worked up an appetite by strolling along Lake Geneva and in the Olympic Park. A dinner of rösti (topped with Gruyère cheese, of course) and, for Raul, melted cheese on toast, was followed by a game of giant chess. The game was played in front of the lake using two-foot tall pieces and a board on the sidewalk. Raul won.