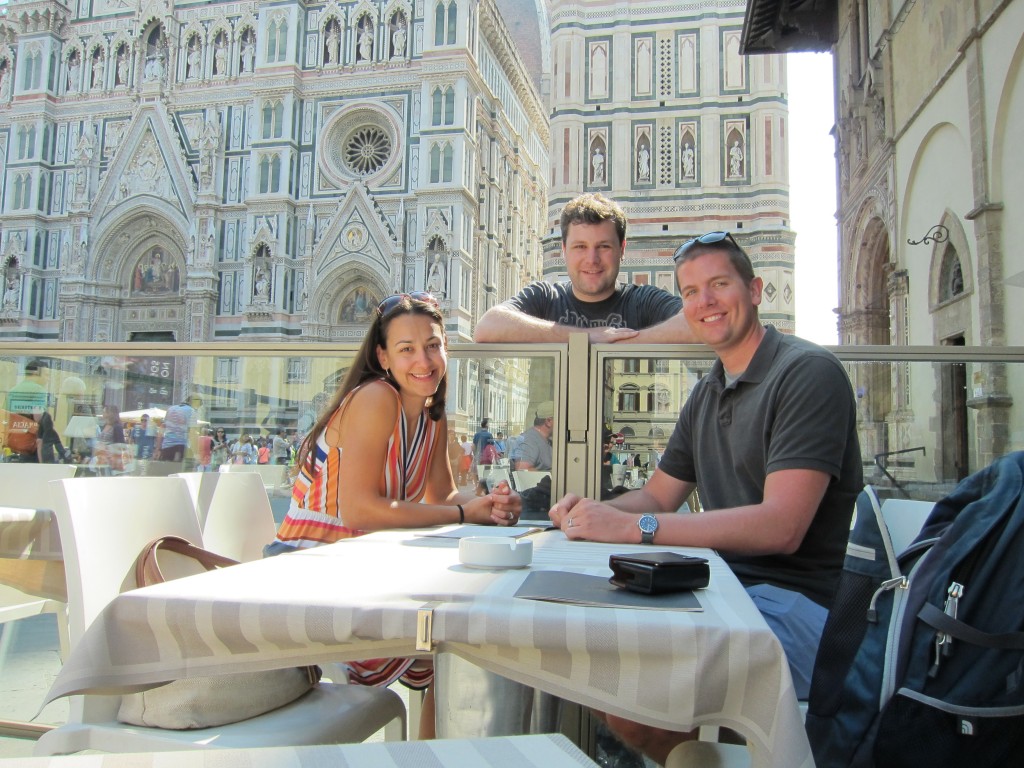 Having coffee in the shadow of Il Duomo.

This past week, I took two days of leave from work to meet up with my friends Chris and Thea in Florence, Italy. They moved to Florida from St Louis, so it has been a while since I’ve seen them. Lauren visited them when she took a trip to Florida with her family earlier this year. I think I got the better end of that deal.

The Kelces are on a Mediterranean cruise, and they stopped for one day in the port of Livorno, Italy. From there, they met me in Florence for about six hours, before returning to their ship. I had intended to take an overnight train from Munich, but that was sold out. Instead, I flew and spent two nights at a friendly guy’s house I found on Airbnb. Overall, I think that was cheaper than the train would have been, but I still look forward to taking an overnight train ride someday.

On the morning of Chris and Thea’s arrival, I rode the clunky bicycle that my host provided me to meet them at the train station. I got my bearings and determined that they could be arriving at one of two possible platforms. My first guess was correct, and soon we were on our way. Thea led us into the heart of the old city, and as we took a break at the foot of the massive cathedral, we all decided that we wanted to climb to the top of Il Duomo. It was a hot and long climb, but we were indeed rewarded with an impressive vista. 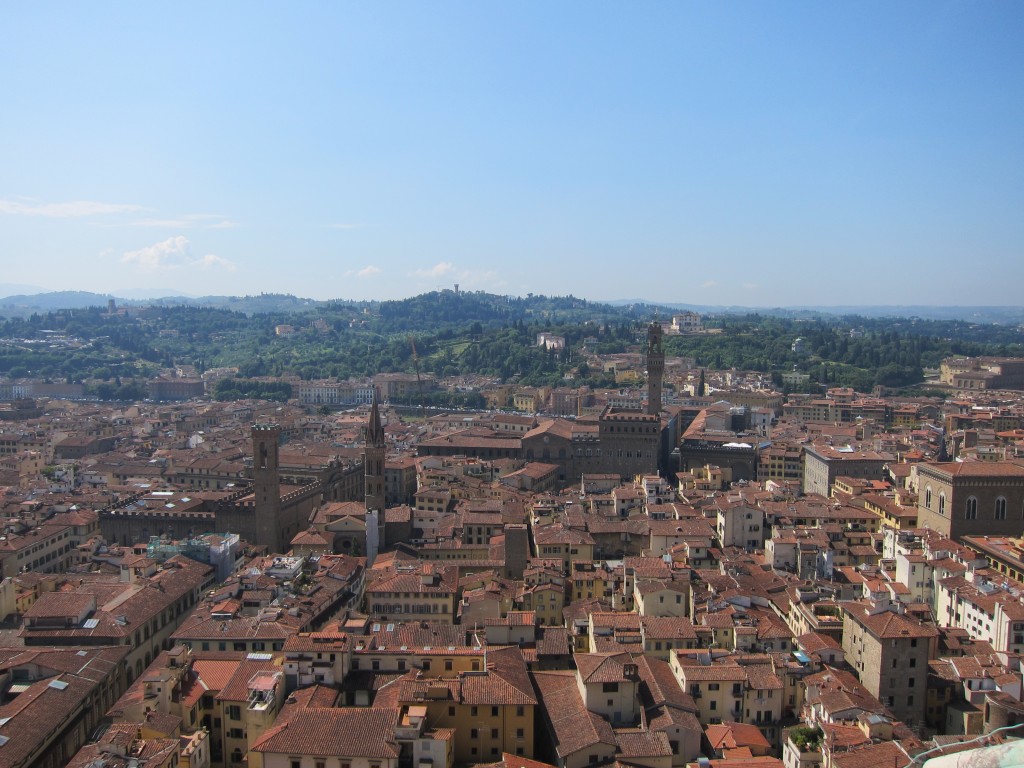 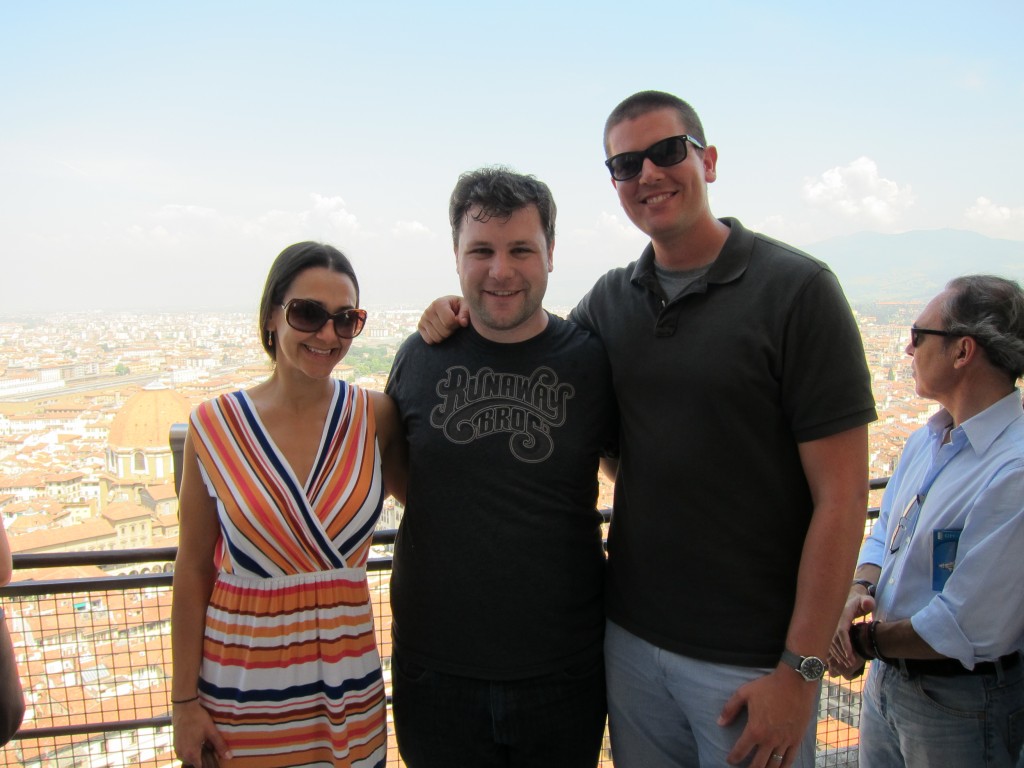 At the top of Il Duomo

We replenished our energy reserves with a lunch of pizza (of course) at a restaurant near the Palazzo Vecchio in Piazza della Signoria. At the entrance of the Palazzo Vecchio stands a replica of Michelangelo’s David. The original was moved to an indoor location in order to preserve it.

After lunch, it took just a couple minutes to reach Ponte Vecchio, an old Medieval bridge that still houses shops. Today, all the shops are gold and silver smiths, but in centuries past, it also had other types of businesses, such as butcher shops. 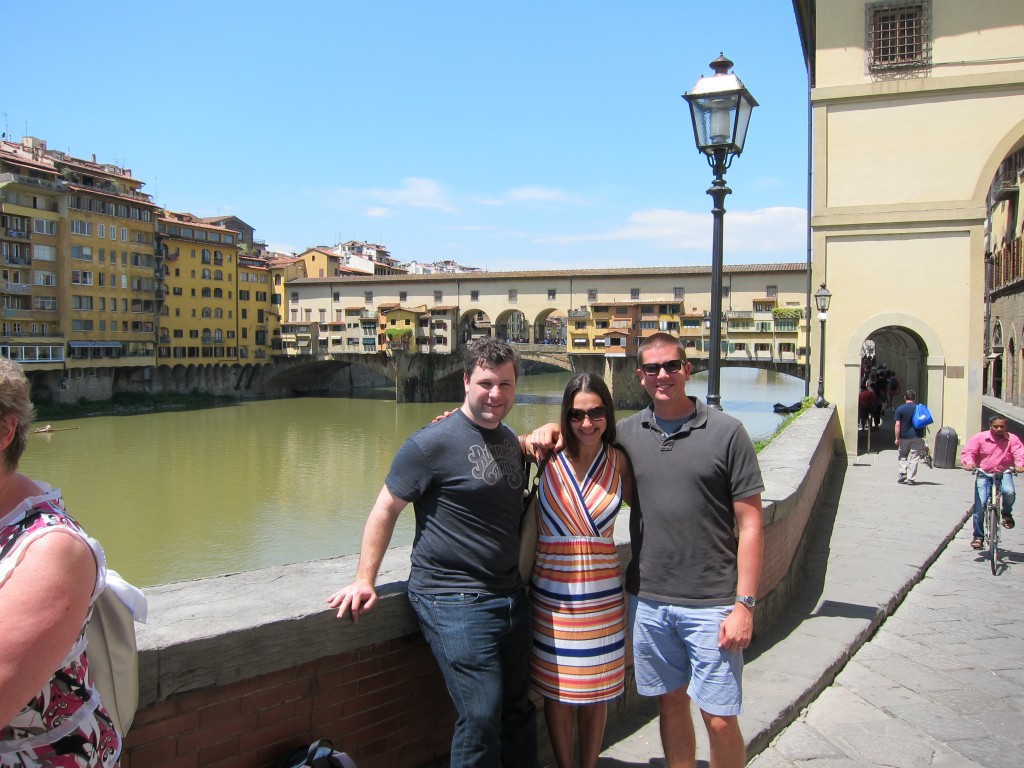 We tried to find some shade in a park, away from the bustling crowds of tourists, but there was nothing open to us, so we decided to cool off under an umbrella at a café with misters. I hydrated, while the Kelces had a cold beer, and then I saw them off to their train with only a minute to spare.

I left the train station on the bike, heading back into the old city. I finally did find a park to read in for a time, though it was rather small and the din of traffic was ever present. At least the people around me were all Italians, as the park was somewhat away from the main sights. I felt glad to have seen my friends, but by this time I was starting to acutely feel the loneliness of being so far from home, from friends and family, and most of all from Lauren. 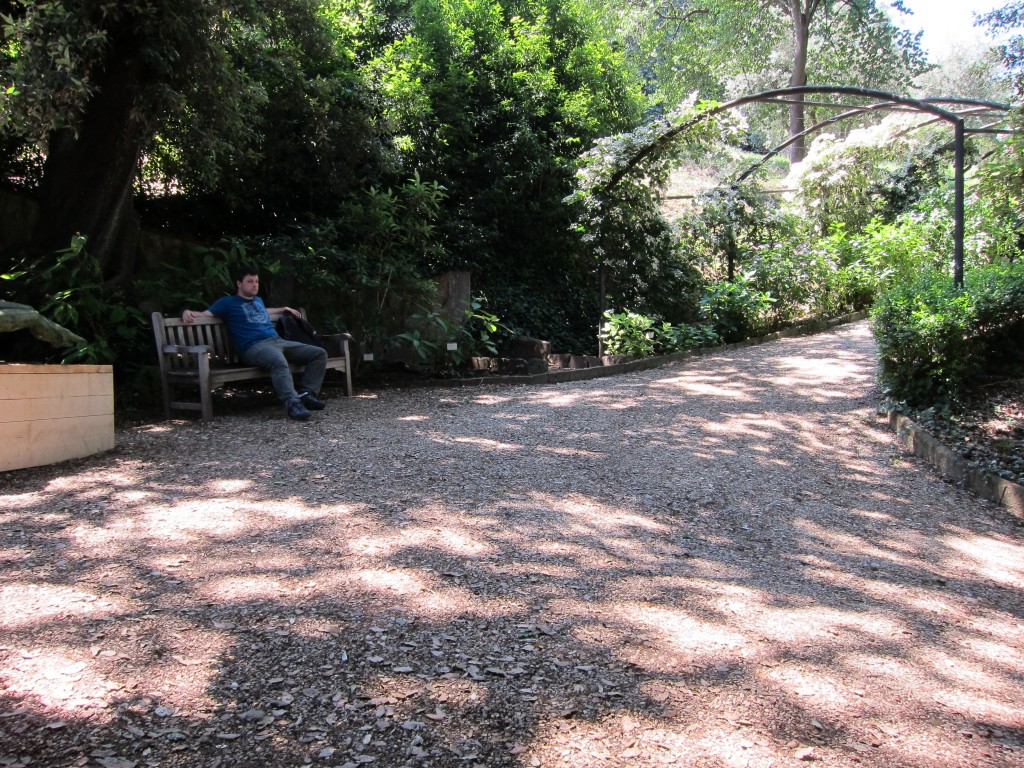 Relaxing at the Giardino Bardini

The following day, my flight was not until 5pm, so I had a good bit of time left to fill with more of Florence. I debated going to the Uffizi Gallery, but in the end I was driven to find the green places of the world once more. I decided to visit the Boboli Gardens, behind the Palazzo Pitti. I had been led to believe that I’d have a nice view of Florence from these hilly gardens, but the best view appeared to be from a fortress above the gardens, which was closed. Nonetheless, I was pleased, and my ticket also included entry to another garden, the Giardino Bardini. This garden was a fantastic treat. I was rewarded with woody lanes, fantastic views of the city, the lovely scents of flowers, and all of this with virtually no tourists. Evidently it has only recently been opened to the public and it isn’t well known yet. 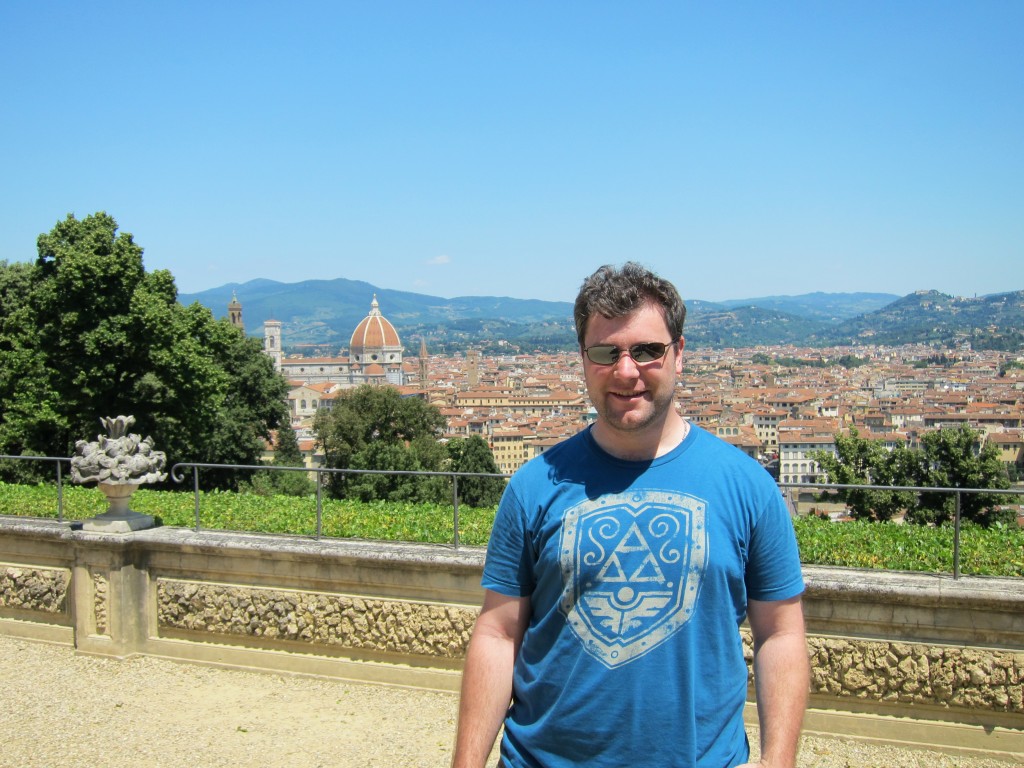 Terrace at the Giardino Bardini

Overall, it was a good trip, and it is a good illustration of one of the reasons Lauren and I want to live in Europe. Here, we’ll have easy access to a multitude of countries and cultures. Munich itself is well placed, being relatively centrally located. I look forward to the next rendezvous with old friends.